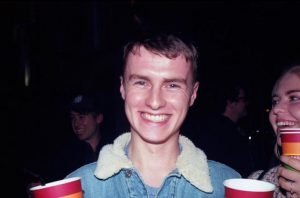 The 1000 Miles for Daragh campaign is a challenge set up by a group of friends who wanted to honour their late friend Daragh Collins. Over the course of February, the group planned to run 1000 miles between them, raising as much money as possible for Suicide or Survive (SOS).

The inspiration behind the campaign was our dear friend Daragh, who unfortunately passed away in 2019. Daragh was as good a friend as you could find, someone who always had your back and was extremely loyal. He was such a charismatic individual who had a unique ability to make anyone laugh, an ability he exploited at any opportunity he could. Daragh was extremely passionate and captivating; you could be talking to him for hours about a subject, not realising how long you had been sitting there. He had such an impact on all of our lives and is always on our minds. We really wanted to do something to honour him, so we took up this challenge.

We felt a campaign with an active element best encapsulated Daragh’s spirit as he himself was an extremely active and sporty person. He was naturally gifted at almost all sports, which could be the reason he was on every sports team in Oatlands College. On the other hand, maybe it was just so that he could miss some classes when matches were on. He really was a jack of all trades and played many sports, in particular GAA and soccer. He played for Kilmacud Crokes and St James FC. Daragh was a diehard Liverpool FC fan and would have been so happy to see all of their recent success. Before Daragh passed away, he was attempting a running challenge of his own in which he aimed to run 100 miles to raise money for the Mater hospital.

With Daragh running his own challenge and his birthday being on February 4th, we thought what better way to honour him than to attempt one for ourselves during his birth month. Initially, 16 of us set out to run 100km each, which would equal 1000 miles. However, the number of participants grew to 24 once word got out about the challenge. Many of those taking part wouldn’t consider themselves seasoned runners but have run through rain, snow and even some injuries this month in order to complete the challenge with some even taking part halfway across the world in Australia. It has been tough, but Daragh has driven us all on this month. With one week left to go, we have completed 1500 miles and expect that number to increase significantly by the end of the month.

With regards to donations, we have all been completely blown away. When discussing targets before setting up the GoFundMe page, we thought €5,000 would be a phenomenal figure to reach. However, within hours of launching the campaign, we had completely eclipsed our original target. We were on course for raising €10,000 in one day! At the time of writing this, when including corporate donations, we are just shy of €28,000 raised and hope to pass this milestone by the end of the challenge.

Peoples’ willingness to donate to this challenge and to SOS has been nothing short of amazing and has really served as inspiration for us all. At a time when mental health issues are more prevalent than ever with current restrictions, lack of human interaction, and financial burdens as a result of COVID-19, seeing people’s willingness to support such an important cause and honour such a wonderful person in Daragh has been nothing short of amazing.

We cannot thank you enough for your support throughout the month from all of us who organised the challenge.

To support this campaign please go to: https://ie.gofundme.com/f/1000-miles-for-daragh