A Year Without Beer – Paul Bishop 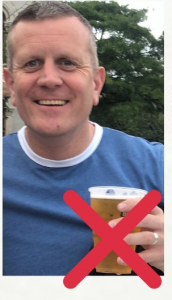 People say I am funny, and being able to make people laugh is  something that I am really proud of.

I love a night out, and the social aspect of meeting up with friends, catching up and most importantly, laughing.

But on my own, I can be funny in a different way. I realise I am very immature, insecure and struggle very much with boredom, and sitting quietly with myself. I know when left alone I am very self-critical, turning my thoughts on what I probably would like to be, as opposed to who I am. I am not perfect, but as anyone who has met my boys Alex and Lewis, (and step-son Keith!), I must be doing something right.

During the lockdown, I found myself trying to escape from these thoughts by treating myself to a few beers every weekend – sitting at home watching TV seemed to be a simple enough pastime, not harming anyone. However, I found that I was staying up later and later, often until 4am, continuing to drink and then being impacted the next day with that grogginess and irritability. I found I was  repeating the process the next night, and sometimes even reaching for a beer during the day. It was becoming very much more a habit and escape than a treat and I felt I needed to set myself a target to achieve so that I could break the cycle I was falling into.

Having seen the great work Suicide or Survive do, and being involved in the fantastic initiative that is Jumpers for Goalposts, I felt the benefits of a year off beer would be two fold in giving me a healthier lifestyle and some fundraising for SOS.

I have been blown away by the support of friends and family – we have already raised over 2k and this before I have even completed half of the challenge. When I began I never thought for a minute that people would donate a penny until it was completed – the trust and belief in me to achieve the goal is very humbling and I thank every single person who has donated – every penny raised will go directly to the charity and go towards education and support of mental health so everyone who has donated is making a difference.