Christine Higgins – “I’ve always felt a connection to the Moon…”

In the early 90s mental health wasn’t spoken about in homes, it was brushed under the carpet and heads were buried in sand. Growing up I got first-hand experience of how mental health can affect families, you see my dad suffered from manic depression and schizophrenia. We always knew deep down something was off, but it was never spoken about or openly acknowledged. Before my dad’s mental health suffered, he was the most amazing dad ever, he awoke within me my love for the sea, forest walks and the great outdoors. To me, a little girl, he was my world. A strong, tall, hefty man ready to protect me and teach me the way of the land. But somewhere along the way, my dad lost himself, through his own childhood traumas, grief wrapped its claws around my dad and refused to let him go. Where once there was a man full of life with a twinkle in his eye, who loved to entertain playing the banjo to a packed pub. Now stood an empty shell, a man that had given up, a man that couldn’t leave his past behind.

My dad died in 2013, but I never cried you see, I lost my dad back in 1996, this sense of grief was nothing new to me. As I continued on with my life, having four kids, and getting married my mental health started to suffer too, I guess it was now my turn for grief to try and wrap its claws around me! The cyclical ancestral trauma that constantly rotates through generations after generations, was now making its way towards me with great speed.  But with the awareness I learnt from my childhood, I could see it happening before it could happen. So I went and sought help. Whilst I did go to counselling, I found that most of my healing came from Mother Nature, the Cosmos, and the Universe.

Sea swimming became my daily ritual, while it gave me the chance to stop and clear my mind. It also brought back memories of my dad who taught me how to swim. Yep, he used to just throw me in and say, ‘sink or swim’! To this day when things get tough, I can almost hear his voice over the waves whispering, ‘sink or swim’. Giving me that extra push of resilience, whenever my strength wobbled. 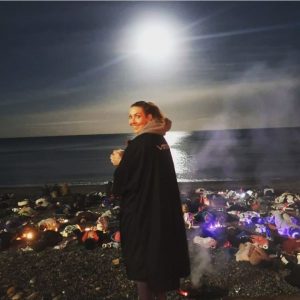 I’ve always felt a connection to the Moon. I guess it was all the times he brought us camping, out late with our torches and hearing the field mice rustling through the hedges. We would look up and marvel at the glow of the Moon, we almost convinced ourselves we saw the man on the moon! Fast forward when I was a confused, angry teenager, and couldn’t deal with the void in our family home.  I used to climb out of my bedroom window and sit on my chimney and look up at that very same Moon. While everything had changed on this planet Grandmother Moon was still there, sending her healing glow to me, watching and minding me, her emotional energy soothing me. A constant love, a constant reminder, that while everything can change, love, guidance from Mother Nature, will always be here.

With mental health on the rise during the pandemic, I had a strong feeling that people needed a space where they could be held, a space to release their emotions, and a space to open their hearts and manifest what their heart truly desires. To believe in the powers of the Universe, to see the benefits of releasing their emotions under the Full Moon, and to feel that reset within themselves as they step into a new Moon cycle, with fresh hope and energy.

To be honest, public speaking scares the hell out of me…. My mouth goes dry, my knees start knocking, and my voice starts to shake uncontrollably. But the deep-rooted desire to do this event for people, is more important than the fear. So, every time I am on Killiney Beach, about to kick off another Full Moon Healing Circle, fighting through my fears, those self-liming beliefs, and those niggling doubts…. I can feel my dad standing beside me, beaming with pride. Sending me the strength I need to keep pushing through, because this event is bigger than me, this event is bigger than my fears, this event is for the people who come.